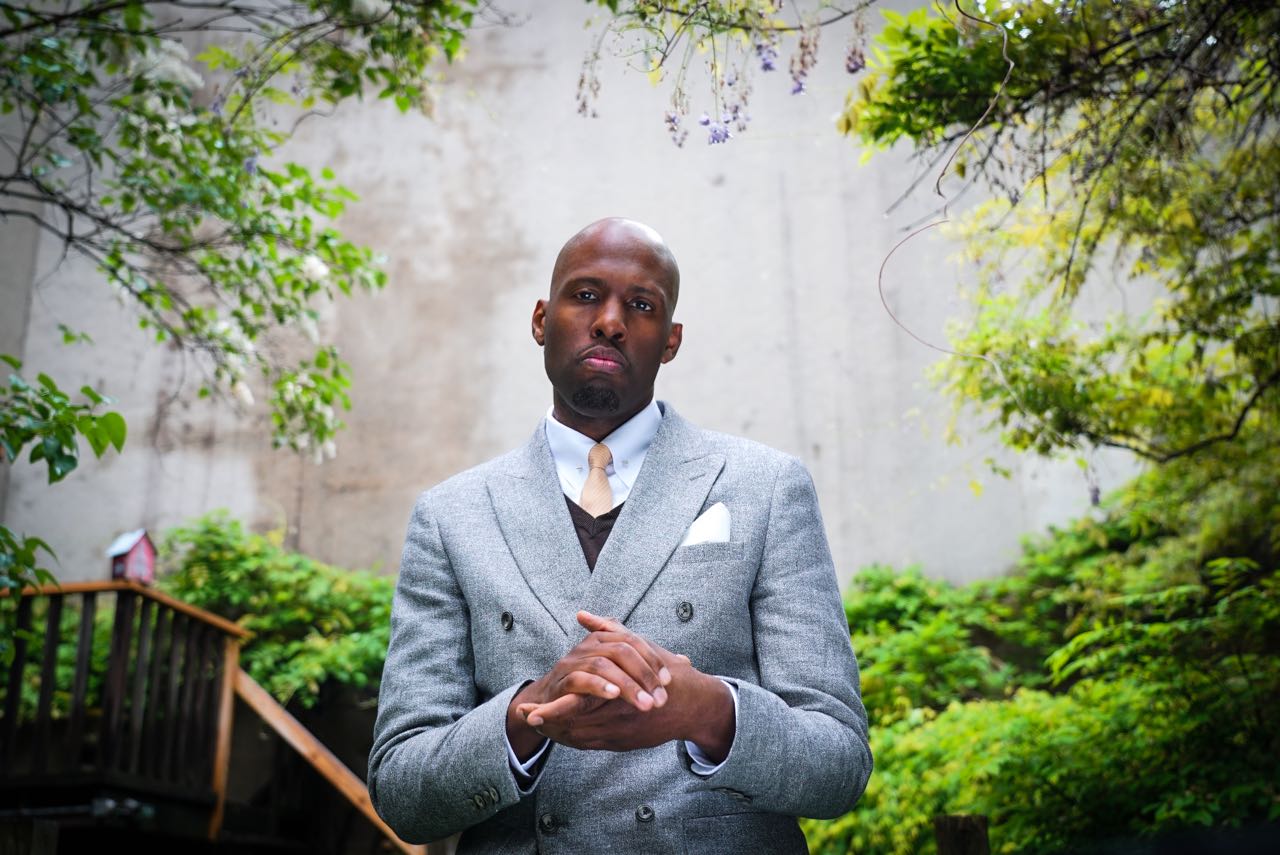 A conversation with Aziz M. Bey, founder and president of The PurpleThrone Corporation, admits that delighting in being told that he is “the new hero of the music industry” could legitimately change everything. (Photograph by Joseph Ciccarella (JC)/ Quiet. All. Around)
By FRANKLIN COOPER February 28, 2019

“Hi, I’m Aziz”, he says. As if I didn’t know! Aziz M. Bey, Chief Executive Officer, PurpleThrone Technologies Corporation, sitting right across from me at a seamless dark oak table at his DUMBO headquarters in Brooklyn. Like Ralph Lauren’s RL Vintage Collection, Aziz dresses with a style of those who’s lost the need to show off anymore. In fact, Ralph Lauren’s story couldn’t be much different. I once met the young man from the Bronx who’s now become a fashion tycoon. Now here’s the young man from Brooklyn whose ideas were manhattanish long before his time. Aziz is the new hero of the music industry. We’ve met a few times before, and I ask if he even cared about the latest developments in the mainstream music scene. He does – I exhale, because according to a Citigroup report, the music industry is as healthy as ever with 42 billion in revenue in 2018. PurpleThrone, by at least one definition, is the amazon.com of the music industry. It’s a friend, not a foe. But, like any great question of power and influence, it’s not that simple.

Thinking back to the day before, I entered LAX with my Tumi in tow. I pulled out my S9 to show the agent my boarding pass. Once through, I walked over to the frequent flyers lounge, sat down, ate a light breakfast, checked my email before I walked to my gate. I looked down at the small section of my life situated at that airport dining table: My new Adidas ultraboost sneakers, my cashmere ‘swacket’ (that’s 50% jacket, 50% sweater, 100% cozy), my too-soft-to-be-outside duffel bag, and my Galaxy S9.

Now here’s the young man from Brooklyn whose ideas were manhattanish long before his time. Aziz is the new hero of the music industry.

Then I pullout I my headphones to tune into The New ResistANTs, a great new rock band that was gifted to me from this app (PurpleThrone). And then I realized that the man with whom I would spend 45 minutes with the following day is obsessed with catering to my own personal music needs. If you were ever to log on, you would experience this same exact feeling.

To put things in perspective: PurpleThrone shifts the power from the Major Labels back to the musicians, giving every musician a chance to pursue their dream. And the man I am here to see is the brain of this evolution, though one seldom hears his voice. He doesn’t do much press, but he is PurpleThrone. And I’m here to talk to him about what everyone is waiting for – the release of the Android Beta App and PurpleCoin. His team is unlike any other corporation. Veterans of industries like engineering, education, journalism and music. They’re not dressed pretentiously, but they do drop subtle hints of hubris with boots from Bottega Veneta. It’s a subtle indication that PurpleThrone isn’t just a bootstrapping startup anymore, but the most disruptive music streaming service in the world.

On his table, there are displays of beta app designs, case studies, flows, charts, roadmaps, etc. I pull out my Galaxy and begin a voice memo recording. Then, I pulled out my small Sony voice recorder for backup – a habit that simply won’t die from those 24 months in journalism school.

Aziz, I wanted to start with something simple, for our base of investing enthusiasts: Are you one of us?

Aziz M. Bey: The earliest memory I have was driven more by the fascination of how the thought of spending money actually motivated people rather than by the science of making it. In middle school, my father would drag me out into the blistering cold to sell Holiday cards. At the end of the work day, he would tell me: “Save half and spend half.” This was my first hard lesson on supply and demand. By the time I was a senior in High School, I saved nearly $5,000.

FC: In your early years as a businessman, what’s the pivotal moment that might have shaped PurpleThrone?

AMB: I hated being outside in the freezing cold (He laughs). But, I learned the importance of image. People purchased my cards based upon my presentation. So at PurpleThrone, user Interface is just as important as user experience. Our products must be as beautiful to the eye and touch as they are in functionality and practicality.

FC: “based upon my presentation” – Intuitively we all know this, but this seemed really odd coming from an independent thinker like Aziz.

AMB: I remember buying into a MLM (multi-level marketing) company in College. The student who brought me in, took me to a Friday meeting at some upscale hotel. All I would hear about was how much money I could make with a modest investment of $499. They even assigned me two “mentors” who assisted in pillaging through my address book just to pitch my friends and family. Of course, I made no money and so I devoted my time to my studies- Finance and Economics. The first investment I ever made was in Microsoft.

FC: What is it about Microsoft that first drew you in?

AMB: I was utterly seduced by the fact that nearly every student on campus was using Microsoft Windows to complete their course work. Computer work was mandatory, but we loved spending the night in the computer lab. I was captivated by how a relatively young company could be such a dominant force in all our lives.

FC: So it seems that you were interested in investing early on. Was this culture of investing something you wanted enshrined into the DNA of PurpleThrone?

AMB: Actually, tireless market research, consumer obsession, testing and measuring was what I wanted enshrined into our DNA. However, since our company is about permitting entertainers financial freedom, it was only natural that we incorporated investing into our genetic code.

FC: I’d love to talk a little bit about your beta product – and how the design process all came together.

AMB: The process was both atypical and typical for us. We are a tight knit group of researchers, engineers, problem solvers and designers. We worked tirelessly on the design and research in a relentless sprint to solve our most pressing problems.

FC: When did you figure out that incorporating blockchain technology would solve the monetization quandary and create a multi-stream income solution for musicians?

AMB: It took a modicum of courage to understand that the busking module, which bands have been using for centuries – wasn’t effective. How we were able to incorporate blockchain technology onto our platform, was a process which entailed rigorous market testing, while simultaneously creating an accurate metric for fan appreciation.

FC: “Blockchain.” Wow, every time I hear that word it makes me nervous.

I am honestly far more motivated by hearing from one of our users/musicians, who believes that our platform has considerably improved their quality of life. It’s a privilege to work on a product that people develop an affection for and it becomes a positive part of their daily life.

FC: What I found so interesting about the new Beta product, at least the first generation of it, is the built-in tipping or crowdfunding feature. In many ways, PurpleThrone is the ultimate entertainment brand, but this felt more purposeful – was this from a personal desire to cater to street and amateur musicians?

AMB: You know we use a data driven protocol to drive our approach to solving problems. But whether we intended to or not, making the crowdfunding feature moved us into a new product space. Tipping allows a street musician to multiply their earnings instantly with our PurpleCoin vs. a U.S. dollar. Tipping allows musicians to tap into the revenue generating machine and gives fans a permanent real-life emotional connection.

FC: Sharing playlists has taken on such a prominent role in the function of the Beta App – it seems like with each generation the social aspect becomes even more important. Was that intentional from the beginning, or is this just how you find most people are using it?

AMB: Absolutely! One of the primary applications deeply embedded in the very first iteration was to track, communicate, and encourage peers to curate, create, and share. While this was always a primary focus, there is nothing as motivating or encouraging as hearing directly from our friends.

There are other products and features, like LIVE venue ticketing technology, to rival the likes of Ticketmaster, Stub Hub, SeatGeek, etc. that are coming down the pipeline. Stay tuned.

FC: At this point, we have to get on to photography.

Aziz and I stand up, we shake hands, and he goes into his office to change into his Gray Twill Blazer. It makes me think about what he just said – how patience, quality, love and consistency creates an identity. This is exactly what he has done over his four years at PurpleThrone. He’s helped change how we discover hidden gems, how fans appreciate it, how we consume it and how we share it. I think of just how brilliant this man is and how beautiful the PurpleThrone experience was. How PurpleThrone has enriched my life and the lives of those around me. I feel like I am a part of music industry history. I think of how he has helped to create a brand that the people I respect have so much reverence for.

As Aziz posed for our cover shot, he asked the photographer about his favorite basketball team. The photographer replied, “not the Knicks.” Aziz laughed. Not because he had to, but because he thought how so many New Yorkers dislike his beloved New York Knicks.

When we were are all done with the shoot, Aziz thanked me for my time, grabbed his book bag, stepped into the elevator, and descent back towards his day.

After all, he’s still a Brooklyn kid.